Michigan Cheer Judges Association
Back to all News 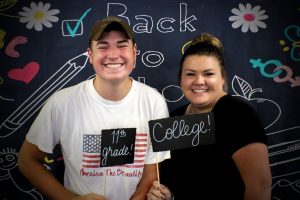 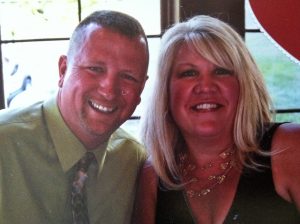 We hope it is fun for you to read a little about the people representing MCJA in and out of cheer!

Q. Where did you grow up?

A. I grew up on a lake in a subdivision named Lake Sherwood in Milford Michigan. Growing up I remember my dad pulling us forever behind the boat; and we would water ski until our legs couldn’t hold us up any longer or we ran out of gas. One family owned a parasail and we would parasail all around the lake also. We had fireworks on the 4th of July where pieces of the burned firework would fall into the boat after we ooo’d and aahh’d over its lights in the sky. I also have great memories of snowmobiling on that same lake. Under one of the bridges, the water wouldn’t always freeze completely, so we would go as fast as the snowmobile would take us over that open water to the other side. To think about that now…it scares me to death!!!

Q. Did you cheer in high school? College?

A. I cheered in middle school and in high school my junior and senior year. I broke my leg (femur bone) 2 weeks before I started my 9th grade year and was in a wheelchair to begin my high school career. (Very funny stories being in a wheelchair in high school!) About 3 ½ weeks into it I had to have my leg re-broken because it wasn’t growing right. That took me out for my freshmen year and I wasn’t confident enough with my leg to try out for sophomore year.

Q. Did you coach? Where?

A. I coached for a little over 20 years. I started out at my alma mater and from there went to Walled Lake Central, Walled Lake Western and Milford. (I took the coaching job at Milford and found out 3 days later that I was pregnant with my son! I really should have backed out but us cheer coaches/judges are hardcore!) After that I really thought I was done; I had started judging and loved it and was content just reaping the benefits of being able to watch/judge the sport I loved. But, then I was approached by one of my closest friends, Stacy Smith, and she asked me to coach at Howell High School. After all, I lived in Howell and her husband was the principal. It was a short lived few seasons and once again I felt the overwhelming feeling that I was done. There comes a point when you are unable to give it the attention and dedication that the kids need and deserve and someone else would be better suited. None the less I would go back yet 1 more time (can anyone relate?) and I wound up my career coaching middle school at Hartland with another great friend Kris Lovill. This was by far one of the most enjoyable seasons of all! But, alas it reminded me once again that I am truly done coaching.

Q. How did you get into officiating?

A. After coaching for about 13 years I went to my first judges training. This was shortly after the conception of Competitive Cheer and I was blown away! What in the world was I doing for the last 13 years?? Needless to say I was hooked. (After I attended several trainings to figure out this completely in depth sport.)

Q. How many years officiating?

A. I am proud to say that I have just received an award from MHSAA for 20 years as a Competitive Cheer official. To say I’m surprised I’ve been officiating for 20 years is an understatement! I’m downright speechless! When I told one of my sisters she said, “I don’t think I’ve done anything for 20 years!” I don’t believe that’s true, but it does make you think about it. Doing something you enjoy is timeless.

Q. What do you do for a living?

A. For the last 15 years I’ve been the office manager at Champion Cheerleading. This has been the world’s best job! Are you kidding – it’s cheer!! And on top of that I have been blessed with the most wonderful, generous bosses that ever were!

In addition, I’ve driven a school bus (on and off for the last 19 years) for the Hartland school district. This is also a rewarding job, but in a very different way. I’m one of those weird people that love to drive big and different vehicles. Growing up it was the tractor, our boat, our snowmobile, our motorcycles and my 3 wheeler. (Yes, I had a 3 wheeler before they became illegal!) We had a gravel pit at the end of our road and it was a different landscape almost every time we went riding. (Can you say Tomboy?) Beside the big or different vehicle, I love the kids! They can be challenging for sure, and driving a bus gives new meaning to “distracted driving!” Watching the kids, looking at maps, watching to make sure traffic stops for your lights…and oh yea let’s not forget you have to keep eyes on the road! Then the parent tells you they don’t understand why you didn’t know that his 1st grader was crying, because after all you have this huge mirror that shows you everything in the back of your bus! All joking aside I do love them!

A. My husband Brian and I have been married for 22 years. We knew each other in middle school; or should I say “knew of” each other. I was a grade ahead of him, and the teacher’s assistant in his gym class. He was the boy who broke his leg when he decided to jump down the 4 steps in the art room. In a small middle school everyone knows the kid with the broken…anything. I was one of those girls who in middle school and high school who wondered, “Would I marry anyone I know right now?” I never, ever dreamed it would be him. We went to different high schools (he went to Midew and I went to Flakeland, as we called them.) but as God would have it, about 15 years later we ran into each other. We dated for 6 months when he proposed and were married 6 months later. 1 year total! When you’re sure you’re sure.

We have 2 spectacular children and I could go on and on for pages about them but will spare you and just share that my daughter is getting ready to start her second year at Lansing Community College and plans to get her basics out of the way before transferring to Cleary University for a major in business. She would like to own her own retail business selling formal wear. She is a family oriented, Jesus loving, generous, outspoken, stand up for the underdog always, kind of girl.
My son is now a senior (OMGoodness!) at Hartland High School. He will pursue a career doing something with cars or engines…diesel mechanics is where he’s headed but it’s safe to say he will probably do work on anything with an engine. My son has always been a “gear head”.  When he was six, he would name the make and model of every car on the road. Yes, this made for some very long trips to Florida…ear plugs anyone? He would spout off asking, “Mom, what’s the fastest production car ever made?” I,of course, would not have the foggiest idea and he would answer, “The Bugatti Veyron!” Who the heck knows what a Bugatti Veyron is? And yes, that was at 6 years of age. He is now almost 17 and is a fun loving, Jesus loving, soft-hearted, stand up for his country, country boy – Cowboy hat and all!

Yes, we have 2 dogs: Daisy (commonly referred to Crazy Daisy) and Lily (Lovey Lily). Daisy is an 11 pound neurotic, hyper, shaking mixed breed of Rat Terrier, Chihuahua, and Jack Russell. Lily is half miniature Doberman Pincer and Dachshund. Daisy can jump near 5 feet high from standing position and Lily with her short little Dachshund legs can barely jump up the stairs! They are quite the pair.

A. My husband and I have a 1960 Ford Sunliner convertible (if you don’t know what one is…google it…it’s a boat of a car just add a sail!) We also have a Goldwing motorcycle and we love to go for rides in both in the summer time. We go to car shows, and love to take motorcycle rides to Hell and back. (Hell, Michigan that is…)

As of late, I have been suffering from a little bit of empty nest syndrome. No, my kids haven’t moved out but they are gone doing their own lives much of the time. So quite recently, I have learned to knit and I really enjoy it. I have also learned to play Pinochle and can strawberry jam. I guess I’m getting quite domestic in my older years.

I’m blessed with a wonderful large family which I spend lots of time with, however, I also have 2 non-related families; my cheer judging family whom I adore and my church family whom I can honestly say I wouldn’t have survived this long without. We are very involved in our little church in Brighton, MI., and have been for more than 15 years. All these families are the type you can laugh with, cry with, share with and just be you with! I wouldn’t want it any other way. 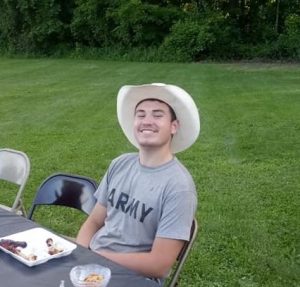 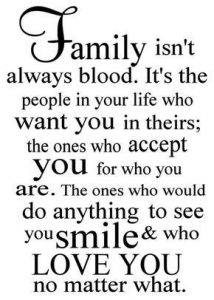 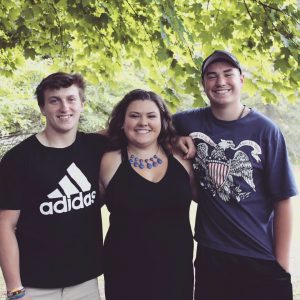